When most people turn an electronic device off they expect it is truly off and not drawing any electricity.  In many cases that is not true.  They still may be drawing “phantom power”,  also called standby power, vampire power, etc.  “Phantom power” was described by the U.S. Department of Energy in 2008 as follows:

“Many appliances continue to draw a small amount of power when they are switched off. These “phantom” loads occur in most appliances that use electricity, such as VCRs, televisions, stereos, computers, and kitchen appliances. This can be avoided by unplugging the appliance or using a power strip and using the switch on the power strip to cut all power to the appliance.” 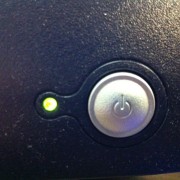 In most electronics, when you push the power button “off” you are actually putting the device in “standby mode”.  The purpose for “standby mode” is different depending on the device.  It may help a TV turn on more quickly by keeping the electronics “warmed up”.  It may operate a light or display on the device that stays on while the unit is “off”, such as the clock on a microwave, or that red light that stays illuminated on your DVD player.  It may allow for the device to read an infrared or FM signal from your remote control to turn on the device rather than you having to walk over to the unit and push a power button.  It may allow a cable or satellite TV receiver to turn on quickly rather than having to reboot and reload programming information, which may take several minutes to complete, etc.

New regulations are in place in most countries to reduce the amount of power consumed while a device is in “standby mode”.  Older devices can use 10 watts or more while on standby.  As of 2010 devices were only allowed to consume 1 watt.  And now, in 2013, most developed countries are limiting power consumption to ½ watt for an electronic device while in standby mode.

There are many devices available to allow you to easily turn off the power at the receptacle to ensure that your electronic devices are truly “OFF” and not consuming “phantom power”.  Many of them will actually monitor the power used by the device in both “standby mode” and while turned on so you can get an idea of possible power and money saved by turning the devices “off”.  Most of them plug into your existing receptacles, so they are easy to install.

If you would like more information on phantom power, or if you are interested in installing devices in your house to truly turn your electronics “OFF”, give Belco Electric a call at 770-455-4556, or visit us online at www.belcoinc.com.

Want to join the discussion?
Feel free to contribute!

What is an Energy star rated bulb and why should I use them? Trustworthy Contractors Are Hard To Find
Scroll to top